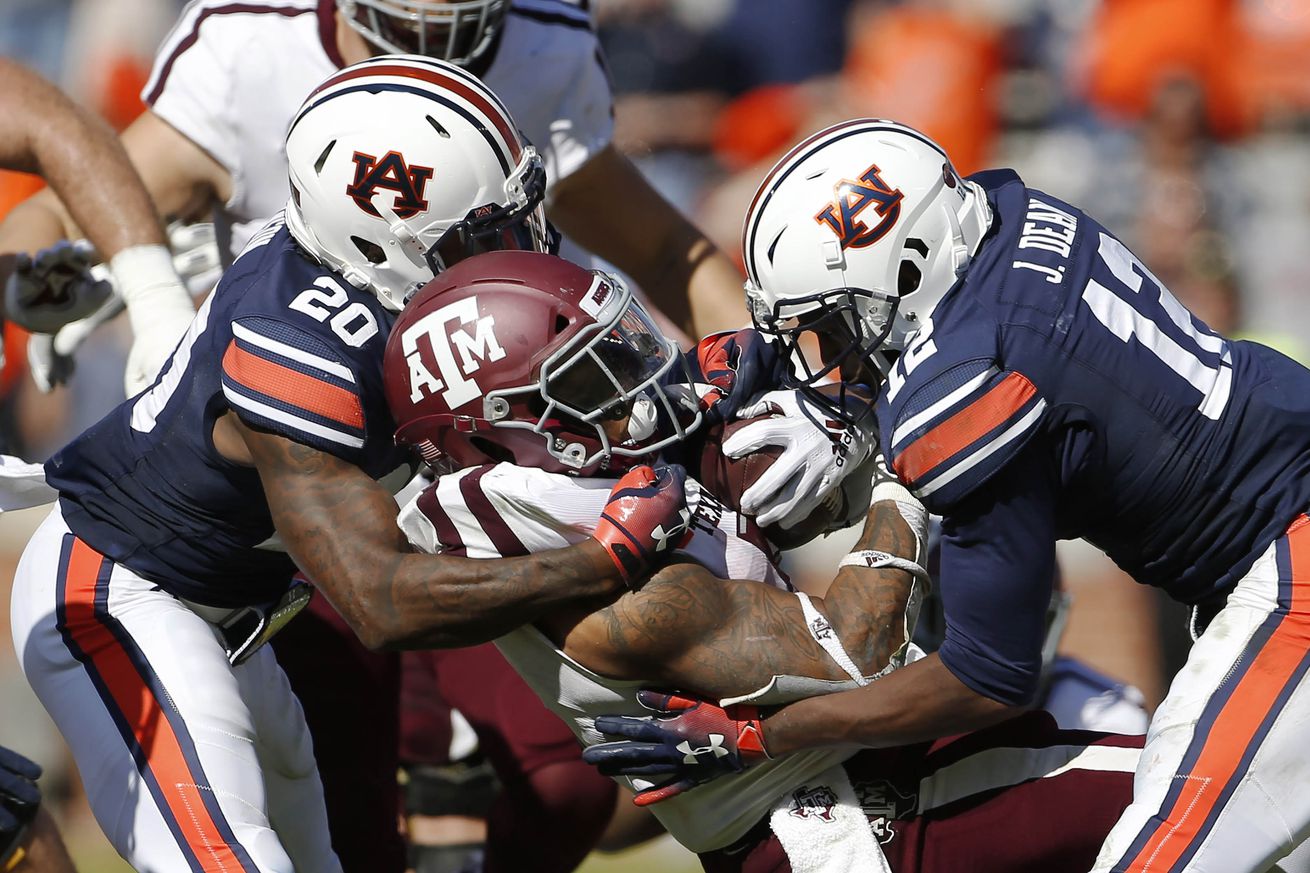 Here is what’s on deck for this week in college football.

This is an open thread for college game chat.

Jim Harbaugh’s Michigan team is always a hard nut to crack as they tend to let you down just when you want to believe in the squad. The pressure in this game is squarely on the Wolverines to deliver as the Badgers don’t have nearly as much to prove. Both teams are coming off their bye week and Michigan should be rested and ready for this one:

The question that begs to be asked is how the bye week will affect both of these squads. The Wolverines are a missed block, a drop, or a bad read here and there from feeling like they have got this figured out, and maybe the bye week helped them to sharpen some of those things up. The Badgers are firing on all cylinders despite blowing out a pair of horrible football teams, but is that really sustainable?

The edge might need to be given to the Badgers in this game simply because through two games, regardless of competition, they have proved themselves capable of playing clean and disciplined football. And they are playing at home in one of the most difficult places to win in the Big Ten, regardless of kickoff time.

Championship teams win games like this. If Wisconsin is a Big Ten contender, they will take care of business at home. If Michigan means business, they will have flipped the switch and won in a place they have not as a program since 2001 and under circumstances which they never have under Jim Harbaugh. This is set to be the seventh time the Wolverines enter a game as an underdog under him and they have yet to win a single one of those.

Prediction: Michigan pulls out a 31-28 win in a wild afternoon game

#8 Auburn @ #17 Texas A&M: The Aggies have a huge opportunity in front of them but now must perform on big stage 3:30 pm ET CBS

This A&M team has taken plenty of good teams to the limit over the past few years but they still haven’t made that leap into a true contender. If the Aggies can step up their game against an SEC powerhouse, they just might be ready for a bigger seat at the table:

Before A&M worries about knocking off the great teams, they must prove they can beat the good ones. And a good team is exactly what’s coming to Kyle Field this weekend.

While Auburn is a cut above programs like Mississippi State or South Carolina, it isn’t a national power. They have an SEC title and two division titles to their name since A&M joined the SEC, but they also have five seasons in which they finished with eight or fewer wins. The Tigers hold a 4-3 advantage over the Aggies since 2012, in a fluky series in which the home team was winless until Auburn managed a comeback win at Jordan Hare last season. Looking at their 2019 team, they passed their only test so far, beating Oregon 27-21 to open the season at AT&T Stadium in Arlington.

The bottom line is that while Auburn is good, they are the kind of program that, if the Aggies are to get where they want to go, they must start beating consistently, especially at home. Under Kevin Sumlin, the Aggies were notoriously bad about beating conference opponents at home, going 8-15 in SEC games at Kyle Field from 2012-2017. In Jimbo Fisher’s first year we saw marked improvement, with A&M beating all three SEC home opponents (Ole Miss, Kentucky and LSU) and going 6-1 overall at Kyle Field, with the lone defeat being a two-point loss to Clemson. Win on your home turf this Saturday, and you are 1-0 in SEC play with a top 10 win under your belt and every conceivable goal for this season still on the table.

Prediction: Bo Nix plays well in this road test but it’s not enough as the Aggies win by four

This is the BIG-12 opener and it’s a big one for the Texas Longhorns, who are coming off a predicted dismantling of Rice. The Oklahoma State Cowboys and specifically Mike Gundy have had Texas’ number since 2014. Often times, these games are decided by one score or less.

The Cowboys are walking in with the nation’s leading rusher and receiver too which will put a ton of pressure on Todd Orlando to dial up the defense. If the Longhorns want to compete for the BIG-12 Championship, they need to clip Gundy’s mullet and take care of business:

For Texas to truly take that next step and become what it wants to become, a Big 12 headliner and perennial national power, it will need to prove capable of consistently beating second-tier, fringe-ranked teams, as well, and Oklahoma State is an ideal example of that.

The Pokes, featuring one of the nation’s most prolific offenses and potentially the nation’s top running back and wide receiver in Chuba Hubbard and Tylan Wallace, respectively, pose their own set of problems for the Horns, for obvious reasons. It would be safe to label the Oklahoma State game as a trap game for Texas, but since the Cowboys don’t come with a number next to their name, this matchup is probably being overlooked a bit and maybe not discussed enough as one that the Horns can quite easily lose.

Recent history certainly suggests that to be true, as Texas has dropped four straight games to Oklahoma State, and seven of the last nine meetings, including last season when the Longhorns were also said to be among the nation’s elite, entering Stillwater at 6-1 and No. 6 nationally before heading home with a 38-35 loss. The Horns haven’t beaten the Pokes in Austin in a whole decade.

Prediction: Sam Ehlinger and the Horns hook the Cowboys in a shootout 45-38

#7 Notre Dame @ #3 Georgia: Two of the nation’s top-ranked offensive lines featured in one game, which proves to be the difference? 8 pm ET CBS

Two very decent quarterbacks as Ian Book’s Irish travel to Athens to meet Jake Fromm’s Bulldogs. Both quarterbacks know that they owe a lot of gratitude to their tremendous offensive lines. There is no doubt that many NFL scouts will be in attendance for this one just to get a look at some of these big uglies. The Irish defense is going to find it very tough to slow down the Bulldogs attack on offense and they are a considerable mismatch.

However, Georgia’s defense will also have an equally difficult draw trying to keep the lid on the Irish offense though the Bulldogs might be more equipped to do so:

Whereas the Georgia offense vs. the Notre Dame defense appears to be a potential mismatch considering their strengths and weaknesses, the Notre Dame offense and Georgia defense looks to be a much more even match-up.

The Bulldogs are #7 in the country in Defensive SP+ and the Irish are currently rated 7th in offensive SP+. ND is missing some weapons and appears to be a work in progress on the offensive line, while the Bulldogs look talented but have a number of key contributors with limited experience out there.

Overall, this match-up will likely come down to the performance of ND QB Ian Book, who hasn’t been bad in his first two games of the season, but he also certainly hasn’t seemed to be any better than he was in 2018. Last season, Book dazzled most of the time but also struggled against teams that could deliver pressure up the middle and drive him from the pocket, like the Pittsburgh Panthers, USC Trojans, and of course that Clemson Tigers defense that battered him all day in the Cotton Bowl.

Prediction: Georgia pulls away late for a 35-24 victory over Notre Dame