What to know about Mason Rudolph, the Steelers’ new quarterback 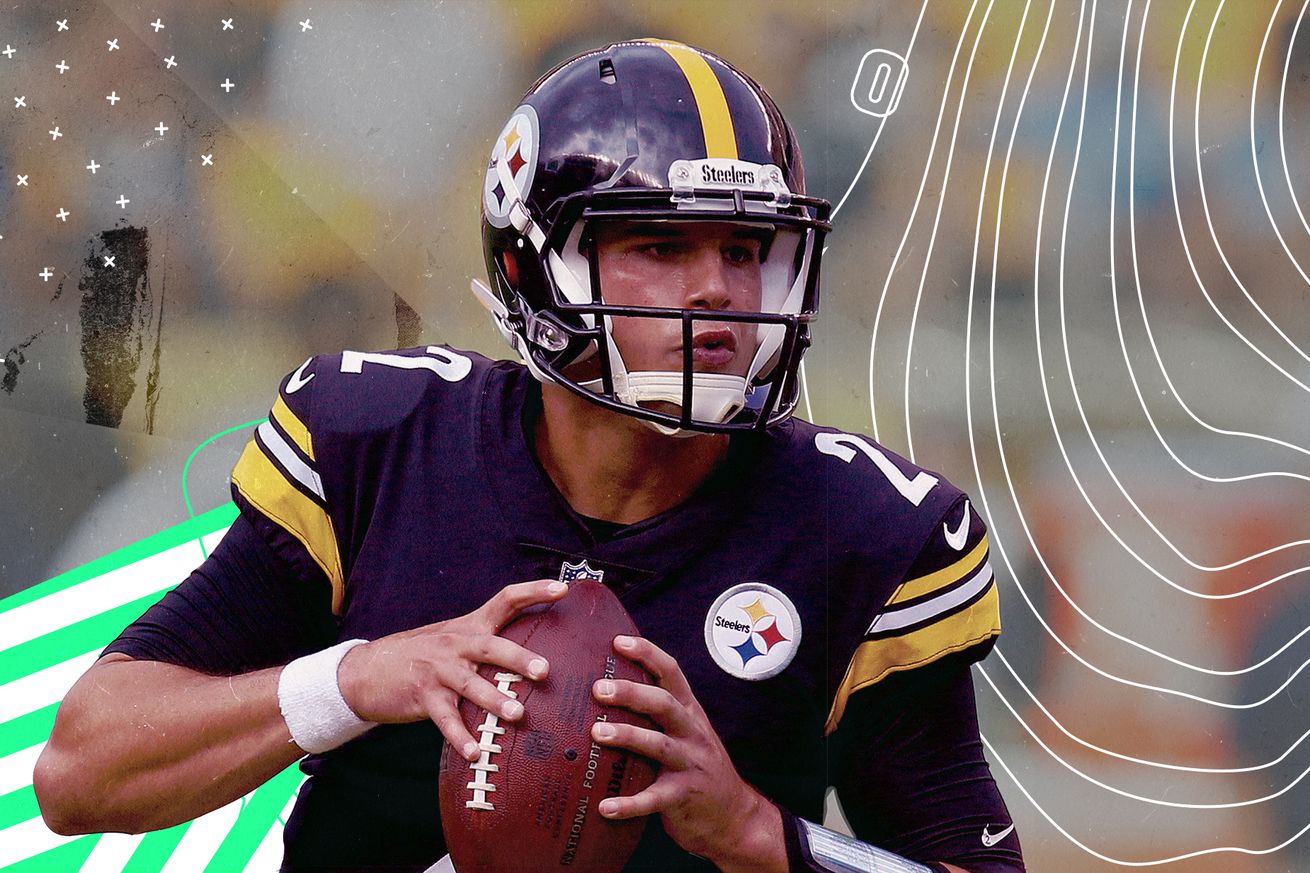 Mason Rudolph is taking over for veteran quarterback Ben Roethlisberger, who suffered a season-ending injury.

Before arriving in Pittsburgh, the Steelers’ third-round draft pick put up some big numbers at Oklahoma State.

The Pittsburgh Steelers will have to play the rest of their 2019 season without veteran Ben Roethlisberger under center due to an elbow injury he suffered in Week 2. Now, the Steelers’ immediate future lies in the hands of second-year quarterback Mason Rudolph.

The Steelers drafted Rudolph in the third round in 2018. Although Rudolph hadn’t played in the regular season before, he had a strong debut coming in for the injured Roethlisberger, throwing for 112 yards, two touchdowns, and an interception (one that dropped out of his receiver’s hands) in a 28-26 loss to the Seahawks.

With the Steelers trading third-string quarterback Joshua Dobbs to Jacksonville, Rudolph is Pittsburgh’s quarterback for the remainder of the 2019 season.

Rudolph might be a new name to NFL fans, but the Steelers drafted a player who put up monster numbers at Oklahoma State for three seasons.

He finished as Oklahoma State’s winningest quarterback in school history, compiling a 32-9 record as a starter and leading the Cowboys to three 10-win seasons. Rudolph also set 54 school records, both single-season and career marks for passing yards, touchdowns, and pass efficiency.

Even though Rudolph worked in a spread offense under Mike Gundy, there were pro-style elements involved. Via Ian Boyd:

The Oklahoma State offense often worked in a “pro-style” fashion, in that Rudolph would approach the line of scrimmage with a menu of options, based on the look the defense was giving. Then he might check the play to one of a few alternatives if he saw an opportunity to hit a big play or smelled a negative play coming.

In his final season in Stillwater in 2017, he led the country with 4,904 yards through the air, a full 277 yards ahead of some guy named Baker Mayfield. As my colleague Christian D’Andrea points out, Rudolph didn’t have as much hype as the likes of Mayfield, Patrick Mahomes, and Kyler Murray coming out of college, but Big 12 quarterbacks have found success recently in the NFL.

Before he entered the league, Rudolph was optimistic his game would translate to the next level.

“I think you’ve seen spread quarterbacks come to the league the last five years and they’ve ended up being pretty successful at the next level,” Rudolph said during the 2018 combine. “And I think you’re definitely starting to see a lot more of those concepts, and the high-tempo type offenses, NFL teams adopting more of that philosophy.”

Later that year, Rudolph was the sixth quarterback off the board in the draft. The five before him were all selected in the first round. But here’s something pretty cool: Rudolph will get to go up against all five of the quarterbacks drafted ahead of him this season. The Steelers will face Mayfield, Lamar Jackson, Josh Rosen, Josh Allen, and Sam Darnold during the regular season.

In particular, the Steelers-Browns games on Nov. 14 and Dec. 1 might have some added juice with Rudolph and Mayfield, who by the way played for bitter rival teams in college, too.

Rudolph may not be as interesting off the field as fellow new QB starter Gardner Minshew, but a few fun facts:

One of Rudolph’s best Oklahoma State highlights was him throwing a perfect pass to this dude on a jet-ski, joining the trend of aquatic trick shots by college QBs during the summer of 2017:

He also did yoga, which he incorporated into his workout routine in Stillwater, with ESPN’s Jeannine Edwards:

He also once met Backstreet Boys members Nick Carter and Kevin Richardson in Israel! He has smartly since-deleted old tweets, including the photo he tweeted of the three — likely a good idea since he @’ed Paris Hilton in it, too. Good thinking, Rudolph!

2018’s loaded quarterback class put Rudolph as a projected second- or third-rounder, which is right where Pittsburgh drafted him.

But Rudolph didn’t win the backup job right away — he was beaten out by Dobbs for the position in 2018. Rudolph said that being the third-string QB motivated him during the offseason and preseason camp.

“It was a change, but I think I will be better for it down the road,” Rudolph said in March. “It was a year I could focus on helping our team, being a guy behind the scenes, trying to raise my football IQ. I met with Coach [Mike] Tomlin once a week to find out his keys to the game and his insight onto what we need to attack on their defense. That really helped.”

During the preseason, Rudolph showed a lot of growth from Year 1 to 2, which allowed him to win the No. 2 job pretty handily:

Getting thrown into the fire isn’t easy, but there were a lot of bright spots in Rudolph’s debut.

After entering in the third quarter against the Seahawks, Rudolph’s first three passes, including the interception, were off the mark. He then found his stride under center and finished with a 92.4 passer rating. Steelers offensive coordinator Randy Fichtner even dialed up some trickeration for Rudolph with this 45-yard flea-flicker to JuJu Smith-Schuster.

Who doesn't like a good flea flicker? Could this be the future look of the Pittsburgh Steelers? #SEAvsPIT

It certainly helps that Rudolph’s college teammate, James Washington, is with him in Pittsburgh, too. Throughout their years playing together at OSU, the Cowboys’ offense relied on Washington being able to slip past cornerbacks on post routes:

Rudolph found his college go-to receiver on a screen last Sunday, and there will likely be more where that came from. Pittsburgh’s offense will look different with Rudolph instead of Roethlisberger under center, and he should open up the Steelers’ play-action pass game, like he did with this touchdown to tight end Vance McDonald:

From All-22: Rudolph off play action touchdown pass to McDonald. #Steelers pic.twitter.com/W8Lq5JInSn

Even if Rudolph wasn’t expected to be pressed into duty, he impressed his teammates with his poise.

“He handled himself really well,” Steelers guard David DeCastro said via the Pittsburgh Tribune-Review. “Really proud of him, how he came in ready to go. He knew the playbook, had a big command, and he mixed some of the cadences, too.”

“He’s thrown the ball and made his reads, and he’s very deliberate about that,” McDonald added. “It’s something we can look forward to on offense. I think him and (offensive coordinator Randy Fichtner) have a great connection. He’s come a long way since last year. If he’s our guy, he’s our guy. We’ve got to move forward with him.”

The moment wasn’t too big for Rudolph, who Steelers guard Ramon Foster said prepares “like a mad man” before games.

“He steps in and does what he is told,” Washington told reporters. “He puts in film work. When his number is called, he is ready to go. What he does in practice he takes to the game. He watches film and studies and studies. What he sees from that week of preparation you see him doing that in the game.”

While the loss at home dropped the Steelers to 0-2, Rudolph still received overwhelming support from his teammates.

Rudolph has a chance to set himself up as Roethlisberger’s successor down the road, too.

After this season, the 37-year-old Roethlisberger has two more years remaining on his current contract with the Steelers. No one knows how he’ll come back from this injury, but he’s made it clear he still wants to keep playing.

The Steelers appear to be confident in both Rudolph and Roethlisberger, too — they traded next year’s first-round pick to Miami for safety Minkah Fitzpatrick, which means they likely won’t be taking a quarterback high in next year’s draft, if at all.

The Steelers haven’t had to look for a franchise quarterback in 15 years. With his performance this season, Rudolph is hoping to prove their next one is already here.

Steelers vs. 49ers: Will the 49ers wide receivers win against man coverage?