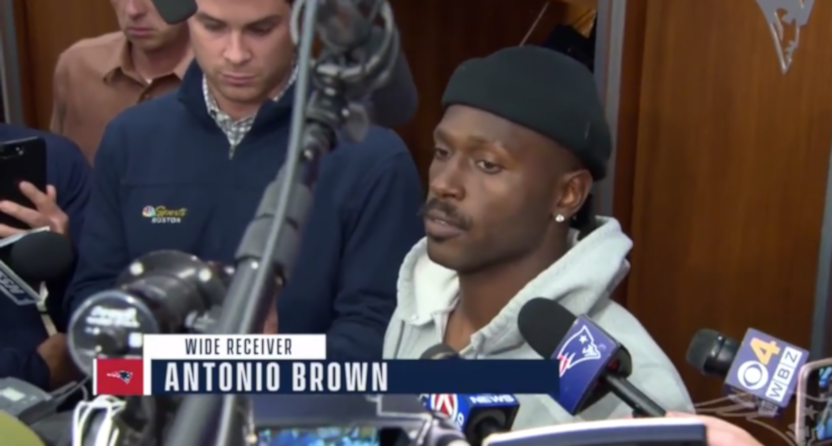 The Antonio Brown saga has taken yet another turn, this time with his release by the New England Patriots. And that’s just the latest chapter in his story. After a lot of drama with the Steelers last season, Brown was traded to the Raiders in the offseason and wound up as a key figure on Hard Knocks between frostbitten feet and helmet disputes. (However, the Raiders’ restrictive access may have prevented viewers from seeing all of what was going on with their discussions around him.) He then threatened to punch GM Mike Mayock, posted a video to YouTube of his conversation with HC Jon Gruden, asked for his release after the Raiders fined him, and was given it, leading to him signing with the New England Patriots.

The drama didn’t end there, though; Brown was accused of sexual assault by a former trainer in a lawsuit filed last week, played Sunday anyway but didn’t speak to the media, saw the NFL meet with his accuser Monday, saw a Sports Illustrated story from Robert Klemko emerge Monday with an accusation of sexual misconduct from a different woman (plus other allegations of theft, unpaid debts and domestic incidents), and then apparently threatened that SI source in a group text  Wednesday (behavior that could carry some further legal implications for him). The woman sent a letter detailing that group text to the NFL Thursday, and the NFL confirmed they’re looking into it Friday. That then led to Patriots’ head coach Bill Belichick walking out of a press conference Friday following multiple questions about Brown, and to the Patriots then releasing Brown with a terse statement:

“The New England Patriots are releasing Antonio Brown. We appreciate the hard work of many people over the past 11 days, but we feel that it is best to move in a different direction at this time.”

Before that statement came out, Brown also tweeted about his departure:

Thank you for the opportunity @Patriots #GoWinIt

That ends with Belichick’s “I think I’ve already addressed this so we’re going to get ready for the Jets here. [I’m] happy to answer any football questions, but I’m done with the rest of it.” And it sounds like “done with the rest of it” summarizes the Patriots’ overall approach to Brown at this point. And the intimidating texts he sent may have been the last straw; here those are, via SI’s Klemko:

New tonight: Antonio Brown sent our source from Monday’s story menacing group text messages, including a picture of her children with instructions for his associates to investigate her.

Her lawyer wrote the NFL calling for the intimidation to stop. https://t.co/rCTM8WSI6Z pic.twitter.com/QtONzBf7Ig

They also released a copy of their letter to the NFL, the Patriots and Drew Rosenhaus. pic.twitter.com/6dtSXuYknW

To be clear, the NFL itself hasn’t taken punitive action against Brown at this point, although Klemko’s source indicated that the NFL told Brown to have no further contact with the source (either directly or through associates) and that the league pledged to investigate that behavior. So at the moment, another team could theoretically sign Brown. At this point, though, that would seem to be more trouble than it’s likely worth, especially as his behavior has now proven to be too much for three separate NFL teams in this calendar year. But Brown remains a talented football player, and it’s going to be interesting to see if anyone decides to try and give him another NFL chance at some point.

What to do with Austin Ekeler in fantasy football: 4 scenarios to consider